Scotland is to have equal marriage – not just equal civil marriage, but religious faith marriage for those who want it too.  And I am dancing on the head of a pin with innumerable angels.  For those who need a translating: I am very pleased and giving thanks to God.

Why?   Firstly because the slur implied  by  insisting that same-sex marriages were some how different-and-inferior and only Civil Unions is now to be wiped away.  Justice will be done and love acknowledged.

Secondly because I think in a perverted and back-handed way the opponents of equal marriage are right.  This new acknowledgement does change things, or rather it acknowledges a change which took place a long time ago.  It shifts the understanding of marriage from its being about gender-roles to its being about love between equals.  Far from regretting this, I rejoice in it.

I actually think this change was begun before the Victorian period, and pretty much complete in the early to mid 20th c. – but in as far as some in society have struggled to recognise it, I am delighted to see it even more openly acknowledged.

And yes there will be troubles and tantrums ahead in the Christian denominations, and a great need for inspired and courageous and calm resolute leadership.  But that is for tomorrow.  For tonight – rejoicing. 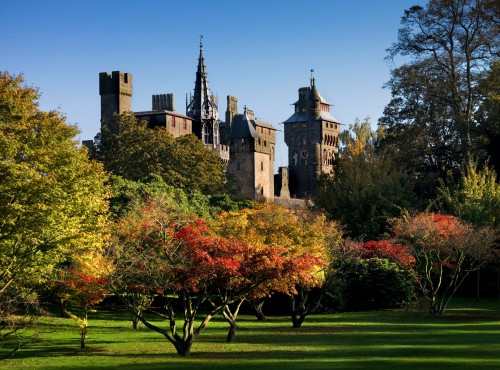 Beautiful, isn’t  it?  The irregular outline of Cardiff Castle, re-worked from a mediaeval original by Billy  Burges.  I’m just back from a book-launch for the Big Biography there (The Grand Designer:  Third Marquess of Bute) and while there had another first, an interview on the radio.

If you are curious it is available at it is until Wednesday at 2 hours 5 mins, or if you miss that, download just the clip of my interview by clicking  on http://mbf.me/etrHm.

I enjoyed every moment of the interview.  It might be cooler to pretend otherwise,  but, no, I just loved doing it.

Posted in the big biography

Tagged The Grand Designer, The Third Marquess of Bute

So, for not-mere-Christianity, we   can agree at once that a lot of the law is good sense, and we would want to adhere to it anyway.  The problems start because most  Christians are not Jews, and they do not want to keep all of the law, most especially the parts which refer to keeping the Sabbath (in as far as we keep any holy day still, it has become the Sunday, and not the Saturday) and the rules governing food.

Pretty early in the history of the church, Peter had a vision  which convinced  him that the disciples ought to be preaching the good news about Jesus to Gentiles as well as Jews, and after a dust-up and some incredibly tough arguments, Paul convinced him that Gentiles could not be made to stick to Jewish food and purity rules.

And this is the first time we get a clear distinction being made between purity laws and moral laws.  The Torah,  the Law, the first five books of the Bible, know nothing of this distinction.  It is a tricky distinction to set about making because of this very fact: it is an artificial distinction.  The writers of the texts did not set them up to be divided in this way.  They had no concept of two kinds of laws.

It used not to matter so much; a consensus had been reached that food/washing/sacrifice laws were no longer biding on Christians, end of.  Then the question arose of whether it was right for a man to have sex with another man.  This is quite plainly forbidden in Leviticus, one of the books of law, where this is described as ‘an abomination’.  For  many this ends the argument.

However, quite a lot of other things are described as ‘an abomination’.  These include things like incest, which we still forbid, and other things, like eating ‘unclean’ birds which we do not.  Indeed, by implication, one passage suggests strongly that eating any forbidden food (shrimps, pork) will be ‘an  abomination.’   Christian opponents of equal sex values don’t give up eating  pork, do they?

I see how the church got backed into this position, because I see why the Jewish church wanted to cling to the profound moral values found in the Torah,  while letting the Gentile church off the hook of the dietary laws.  But it led them into an exceedingly awkward place.  And in my next thrilling instalment, I will look at those piercing profound laws on which we have not touched yet; laws so enlightened that even today they sound radical.

Posted in not mere Christianity